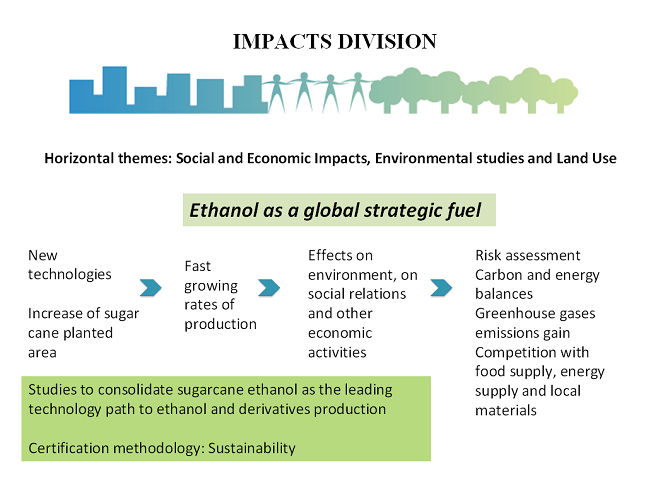 Brazil has a concrete chance for leadership in biofuel production in the next decades. However, one needs to better understand local and global market structure changes, and the conditionings behind rates and patterns of bioenergy diffusion. Particularly, the institutional set of incentives and rules adopted (or not adopted) as industrial public policy in Brazil deserves attention.

The ethanol expansion in Brazil will combine productive gains based on new technologies and increase of sugar cane planted area. Fast growing rates could generate negative impacts on environment, on social relations and other economic activities. It is important to analyze risks and to propose specific methods or policies to avoid these impacts.

SUSTAINABILITY ACROSS THE PRODUCTION CHAIN

Studies on carbon and energy balances are important to consolidate sugarcane ethanol as the leading technology path to ethanol producing and to obtain supplementary earns from international carbon credits market. Main research topics on this theme are:

• Energy balance and integration with other energy sources;

Successful research will bring a production cost reduction of ethanol. Significant externalities benefiting the agricultural and industrial production are expected to generate positive impacts in the regional economy. The creation of new companies, following the concept of Biorefinery and the growing of existing companies also should bring important economic impacts.

On the social side, it is expected that an increase in competitiveness as the production grows, will cretae more jobs (the sale of a ethanol vehicle generates 22 times more jobs than that a vehicle to the gasoline) . An alteration in the profile of the jobs is to be expected, with important social consequences, due to the reduction of the manual harvest, the increase of the mechanized operations and the use of by-products, mainly of the trash.

Studies about the social and economic impacts of the agricultural and industrial production should cover:

• Number and quality of jobs created and displaced;

• Human health benefits and hazards (on field and urban centers);

• Displacement effects and crowding out;

It is also expected that environment improvement due to decrease of cane field burnings and better sustainability indicators will generate a better rural environment for the population located nearby the cultivation and processing areas.

The growing importance of the use of biomass in the world – particularly in Brazil in the form of ethanol from sugar cane – increased concerns over the sustainability of such use.

In 2005 the Dutch Parliament established a Commission with the mandate of proposing biomass sustainability criteria. The Commission produced a Report in July 2006 which covers most of the critical points. Several other activities along the same lines are being conducted, mainly in Europe and might lead the European Union to adopt non-tariff barriers to biomass products (particularly biofuels from tropical countries). It is thus of the upmost importance to assure that the explosive growth of ethanol from sugar cane production in Brazil follows reasonable sustainability criteria which will not hinder its expansion.

The first “criterium”, that is already accepted widely is that the production of biomass (or biofuel) should have an energy balance favorable i.e. the ratio of the energy output in the form of fuel to the energy inputs of fossil fuels be greater than one so the greenhouse gas (GHG) balance is positive. Ethanol from sugar cane in Brazil has a very favorable energy balance. (8:1)

Other criteria considered so far are rather general and have not led yet to a single sustainability index but they should consider:

The Dutch Commission recommends that none of the present conditions on the use of soil should decrease or decline due to the production of biofuels.

In addition to that, strict environment criteria should be established for:

b) Use of agro-chemicals

d) Preservation of quality and quantity of surface and ground water

Under present conditions ethanol from sugarcane production in Brazil complies with regulations established by the Government, particularly in the State of São Paulo but additional research is needed in some areas.

Environment and Sustainability: fields in which additional research is needed

Ethanol use in Brazil has led to considerable air quality improvements in urban centers; on the other hand the sugar cane burning in the field causes problems by dispersing particulate matter and other pollutants. The main positive effects of ethanol use (whether pure or as an additive to gasoline) in urban centers are: elimination of lead compounds from gasoline; reduction of carbon monoxide emissions; elimination of sulphur and particulate matter; and less toxic and photochemically reactive emissions of organic compounds. Ethanol contains no sulfur, olefins, benzene, or other aromatics all of which are components of gasoline that can affect air quality and threaten human health. With ethanol fuel combustion, emissions of the toxic air pollutants acetaldehyde, and peroxyacetyl nitrate (PAN) increase relative to straight gasoline. Most of the emissions are released as acetaldehyde, a less-reactive and less-toxic pollutant than formaldehyde. None of the pollutant is present in the fuel; they are created as byproducts of incomplete combustion.

Conversion of cane to ethanol requires large amounts of water. The total use of water is calculated to be 21 m3/t cane, 1997, of which 87% is used in four processes: cane washing, condenser/multijet in evaporation and vacuum, fermentation cooling and alcohol condenser cooling. Environmental problems relating to water quality, which result from irrigation (water run-off, with nutrients and pesticides, erosion) and industrial use, are seldom found in São Paulo. In this respect, EMBRAPA rates sugar cane as Level 1 (no impact on water quality).

The stillage, or vinasse, which is a black liquid, formed during the distillation process however is an important wastewater flow. Vinasse is highly organic loaded and produced in large volumes and has a pH of 4-5. Vinasse is hot and therefore requires cooling.

A number of studies in respect to leaching and possibilities of underground water contamination with vinasse indicate that there are generally no damaging impacts for applications of less than 300 m3/ha.

As inorganic pollutants in ethanol production it can be cited: agrochemicals such as herbicides, insecticides, fungicides, maturators, adhesive spreading agents and defoliants. The Brazilian legislation, including rules and regulations from production to use and disposal of materials, cover all important aspects.

Pesticide consumption in sugar cane crops is lower than in citric, corn, coffee and soybean crops; the use of insecticides is low, and that of fungicides is virtually non-existent.

Sugar cane diseases are fought against through the selection of disease-resistant varieties in major genetic improvement programs. This procedure has been sufficient to address the occurrences in large proportions, such as the mosaic virus (1920), the sugar cane smut and rust (1980’s), and through replacement of varieties. Genetic modifications (at field test stage) have produced plants resistant to herbicides, smut, the mosaic virus and the sugar cane beetle.

In the State of São Paulo, which responds for 61% of the Brazilian cane production, there is still significant space for an expansion of the production capacity through the use of areas already occupied by pasture. In 2004, the areas in the State used for pastures reached 10.18 million hectares, whereas the area used for cane harvesting for industrial purposes totaled only 3.42 million hectares.

Sugarcane is not a particularly demanding crop in terms of soil, adapting reasonably to soils of average fertility and high porosity / permeability - sandier soils. Obviously, more fertile soils implicate in higher productivity levels, and/or smaller demand for fertilizers and corrective products. However, these are areas of larger land cost. The most critical element is precipitation, because cane crops demand a minimum of 900mm of well distributed rainfalls per year. As the distribution of rains is not uniform, a good precipitation average that guarantees minimum requirements would be 1400 mm/year. Areas that demand financial resources for irrigation purposes are more problematic, in view of the considerable initial investments and the cost of the energy used in irrigation.

Sugar cane crops have been expanding in areas having poorer soils (especially “highly anthropized cerrados”, mostly extensive pastures). They contribute to the recovery of those soils by adding organic matter and chemical-organic fertilizers, which also contribute to improve the physicochemical conditions of the soil, thereby incorporating them into Brazil’s agricultural area. The sugar cane culture in Brazil is renowned for its relatively small soil erosion loss (compared to soybean and corn, for example).

The biodiversity’s impact from the production can be summarized as follows: the direct impact of cane production on biodiversity is limited, because cane takes place so far mainly in areas of pastures and/or food crop. These areas are far from the biomes (see a map) like Amazon Rain Forest, Cerrado, Atlantic Forest, Caatinga, Campos Sulinos and Pantanal or riparian forests. The amount of harvesting area in the Centre-South region increased from 2.8 Mha in 1993 to 4.2 Mha in 2003 and is expected to increase by some 50% to 2010.

The agricultural land use practices’ impacts for conventional crops can be dramatic, affecting everything from biodiversity to the global climate. The biggest threat posed by expanding the amount of land under cultivation for energy or any other use is the irreversible conversion of virgin ecosystems. Deforestation, for example, causes the annihilation of species and their habitats, and the loss of ecosystem functions. Studies reveal that wide-scale destruction of forests can affect the hydrologic cycle and the climate, reducing regional precipitation and increasing temperatures.

The sustainable growing of ethanol production in Brazil must consider solutions to several institutional bottlenecks and efforts to conjugate comparative and competitive advantages.